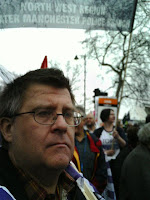 Yesterday it was my birthday: As I enter the next age of life’s journey, another opportunity to pause and reflect। Following a period that has seen personal disappointment, along with negative progress and process within my workplace. I feel a fresh impetus is upon me. Time; some may say belatedly, to cast off the cloak of defensive protection and replace it with a Spartan shield of resolution.
A more focused intent on future days may seem to be somewhat selfish, though one does themselves justice if they are not true to their credo.
Detachment of emotional need may hurt the heart, though who knows what can be gained when striving with conviction of character to reach the goals of one’s principles. After this weekend’s trip to the nation’s capital; where I marched with conviction with others of similar mindset, in a walk of civil disobedience. There was a sense of minor awe and excitement seeing what lots of individuals could accomplish together and for the achievement of a goal. If not the smell, then certainly there was an odour of rebellion in the air – a sense of feeling that intoxicated, it felt good.
The projection of one’s true persona of should be there for others to view and not necessarily Judge It is a trait I feel to be essential in the character of a person. Though it may well be flawed, who can justifiably say that honesty is to be criticised.
Another facet of reflection is that one considers what has been, that although time moves on, the hopes and aspiration of youth is replaced with experience and determination.
For the reality of true Hippies is that that though they may fade away, their influence in shadow will endure, ever present and to return to remind whenever there is a need.
I feel, more of an effort needed by us all to contribute to, and for a better future. I know that having one’s principles can often lead to a decrease in the number of ‘friends’ thereabouts. Still, the road to enlightenment is often a solitary one.
To hold to ones tenet becomes more important as one gets older – and “to thine self be true” a more poignant matter of consideration, and after all looking into the mirrors image should show an image of pride and not shame.
The pace of speed may change, but the wheel will always turn – "onward ever onward"
Posted by Billy at 16:18