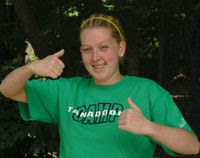 It’s that time again! Rather typical that my second bundle of joy (and fun?!) believes that any day with a “Y” in it has a case for celebration. With the arrival of her 22nd Birthday, well there’s even more of a reason.
My little girl, back from her transatlantic travels (for now) has taken little time in making her arrangements for a themed party, at my house – I guess I am invited (?) well Dad will be needed - another day of tidying up awaits
“Charlie”: or “Ice”: for she is so chilled (?!) ’ has always had the ability to mix in with many and bring a good deal of laughter to those with whom she acquaints. Like her big sister, she also believes in the fulfilment of the 24/7 modern day lifestyles, though is also measured in her actions and careful in her sensibility.
She can sleep-in with the best, but is wide-awake and sparkles into life when the glasses chink and the music starts to play. Unlike, her big sis (and more like Bono) however, she doesn’t seem to have found what she’s looking for, though in the meantime, believes life is for living and its’ next great adventure lies over the next hill; ‘onward ever onward’ or, is it “to infinity, and beyond”?
A sensitive girl (in hiding?) she has always enjoyed expressing her persona and more like ‘Party’ than ‘Barbie’ is looking to take her adventures even further a field (look out Oz!) It is pleasing to know that she (and sis!) encompasses such spirit and drive, that if not to dramatically change the World, then to make their mark upon it – with enthusiastic boldness and confidence.
Well with the weekends’ beano drawing nearer, looks like the preparations begin today, for in the words of that infamous colour ‘Pink’, I suppose the party had better get started (ooh eer!)
Posted by Billy at 11:33