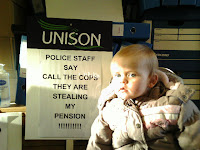 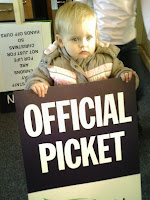 Leading up to the day of planned action there was a degree of expectancy, and on the day I was prepared; though the organisation of others was not as such


I began by picking up a couple of young female students and transporting them to the picket line of Manchester College for to support their teachers in dispute। Having done so I was en route to collecting my granddaughter, and as I drove past where I thought there would be a picket line, I found sadly there was an empty site. I looked around for a couple of minutes before I had an appointment to make. I arrived at my elder daughter’s to an excited Phoebe, and after dressing and feeding her, we returned to the site, passing other establishments which were heavily attended, we sounded our horn and waved our encouragement, receiving a positive response, though when we returned to our point of arranged meet, it was disappointing to find no one on patrol. Undeterred, we made our way to the local site of union residence and announced our arrival. It seemed that we had missed those who had stood in situ and; I was told had been there for a couple of hours – hmm. Anywho, along with my younger daughter and granddaughter, we set off to the assembly point in the town centre and took our place amongst the mass of people in ordered readiness.
The parade began to cheers and we marched on a route that went past several of the major parts of the town to the cheers, claps and waves (including my ex-wife-which was nice) of the general public onlookers that far outnumbered that of the police marshals; horses and all. It was a good feeling to receive the backing of a good number showing encouragement and appreciation. It was a peaceful event with good natured marshalling by those in the force – with thankfully no sign of Lt. John Pike!
Upon completion of the parade, the rally took place in a park near to the student campus of Manchester University where the claxons, whistles, drums and rattles made the point of loud noise to show we were there to be heard.
Despite this, the leader of the CON-DEMing Government saw it in a different way, trying to dismiss it with some contempt before announcing that he would be capping wages; that had been previously negotiated, to a reduced 1% - this based on projected inflationary figures of 3% per annum – oh and confirming that MP pensions would be exempt from this scenario. Two days later, it was reported that the UK is tottering on further recession, with a majority of the population in Wales on the poverty line – Well ‘No shit Sherlock’! Regardless of this, my granddaughter’s first protest of peaceful disorder was one she participated in with enthusiasm and enjoyment, and her part is now embedded in a historical record of the biggest national turn out for decades “Teach your children well” - indeed
Posted by Billy at 07:26