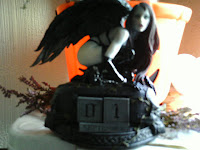 Returning from Glasto to the outskirts of my home town at ‘La Shaw’ I sense a change in the air. Whilst away at the land of Avalon I was within the zone, there I was able to reflect upon a number of things that had weighed within my conscience of curiosity - things other than the norm.
I had the opportunity to engage with several folk of similar mindset, and felt comfortable in both tempo and tone of the conversations I held with them. There is something gratifying in being able to relate to those with philosophy of mood, action and causes that are akin to that of one’s ego, it gives a sense of unity of process; if not unification of opinion.
Now back at my abode of the moment, I feel confidence in expanding upon such good beginnings, and look to venture out with purpose to places and goals anew. I aim to explore such avenues in a vein that I compare to the unwrapping of a mysterious gift, the layers of witch I am discovering more to questions of, than answers to - but isn’t that a worthwhile target of significance to strive to obtain in order to enable the development of both the self, and indeed maybe; in time, a general consensus of opine?
Opening my ‘book of face’, I read replies from messages sent prior to leaving. After doing so with due deliberation, I decided to plan out a direction to my future; albeit that witch may see me once again out in the countryside of a land that many deem make believe – although we all have to find ourselves somewhere ‘over the rainbow’ for peace of mind I feel.
To that end, a degree of self-discipline is called for. In order to pursue another pathway, I decided that to be the pro-active pursuit of academic recognition in creative writing.
With one and a quarter books of poetry already written, a number of stories part written and lots of notes, I have at least contents of draft material, so perhaps now is the time to advance further with these projects, and in the completion of relevant units, find the attainment of such to be rewarding.
Despite assurances to the contrary, the absence of support when it was most needed, leads me to take a solo, some say selfish focus. The realisation that support that I had been desperate to attain, is like that of a lottery win, there in hope and forlorn anticipation, so a different tract is required in order to attempt a satisfactory, if not total, contentment, methinks.
After a short trip to the library to ascertain course availabilities, I eventually arrived at a location of advice that was quite helpful. However, therein I established that recent reductions in public service funding, now see fewer opportunities in ‘adult’ education being made available and Open University the place to enquire within, with usage of distance learning an option. I suppose failing that, there is always the magazine options where financial recompense something to consider.
Like a lot of writers I guess, once engrossed in the mode of verse or essay, emotion can take over. I find my own historical experience always a good reference for me to draw upon; though with a degree of ‘touching up’ perhaps (imaginative license always comes into that of a good tale, yarn or such like) and illusions are I find less restraining and another useful aspect to utilise in the depiction of the word of text – hmm, maybe the phrase “be afraid, be very afraid” comes to mind?
Posted by Billy at 14:24