Death of a Roundabout 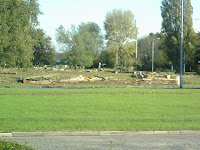 As I look out from my living room window, past the gardens edge, across the green space of free space, the view is of a main road, with the traffic controlled by a roundabout of approximately 70 feet (20 metres) diameter that had stood full of greenery. A barrier of trees formed a protection, standing over bush, grass and flower that gave refuge (be it to of minor respite) for a family of Fox; seen in and about during the twilight hours, on occasion rabbits (though, as indicated, not for long!) and activity therein of squirrel and birds.
It was a site that had stood for many of years in a point of olde past, when tracks preceded the building of roads. Despite the busy activity of traffic; en route to the Airport, the Civic centre and a route where three towns of Manchester, Stockport and Altrincham could be accessed, did its job of slowing the volume and speed of transport at its junction, whilst still affording the facility of access to relevant direction. A guardian of silent and geographical advisory assistance that has seen lots, and folk would agree far better days.
Time however has caught up with this monument, and the modern requirement for speedy and accessible public transport has seen the initiative of a tram system being introduced, sadly, on a route that sees the obliteration of the site.
The chopping down of trees, uprooting of bushes and removal of habitat is something that is heartfelt to this observer, for this is more than a case of progress; even though it is promoted as such.
Despite the perception that I am somewhat of a Luddite, or ‘saboteur – I’m not, I just wonder if there is really a case for a sustainable case for the tearing down of this site. At the “consultation” (yeah right- like they were gonna stop it!) meeting; that was sadly under represented, I was assured that the fares would be reasonably competitive, the noise and disruption would be kept to a minimum and the replacement of nature’s beauty would be forthcoming (re-plating of greenery) – along with the repatriation of animal habitat having been done in a caring and respectful manner.
To me; though that was a factor, it was not the issue. Too easily it seems, we cast aside of heritage, and though not somewhere steeped in a historical grandeur, it still held historical significance.
I await the reintroduction of greenery with a degree of patience, though such realisation of promise with scepticism and that the woodland critters would be able to settle into another habitat with hope. Still even if all is achieved, it is still indeed of a heartache to see, the death of a roundabout.
On the brighter side this weekend sees the home host to a party of youthful exuberance, for another one of my younger daughter’s celebrations; something about her birthday. As usual the normal rules apply, tidy before, Fancy dress, tidy afterwards – more next week.
Posted by Billy at 08:24