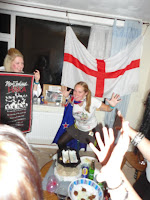 Party time this week past, saw the re-appearance of Elvis in female form, as my daughter made the effort to transform herself into ‘the king’ (she was ‘thanked very much ‘on more than one occasion).
As for me, I went for the punk look of my youth. Reflecting on such, I mused upon how commercialisation had taken its toll, and saw Punk become ‘Alternative’ in order to meet the marketing requirement of the day. Musicians over-rode the raw harshness of originality, though I miss the early days, the musical finesse ensures those recordings remain in latter days.
Although it can be a bit of a bind in preparation and tidy up a bit of a chore, the (beer) bong along with the, ‘yard of ale’ or whatever was put in it, along with other items of alcohol was liberally consumed however, ‘back in my day’ there was never that much wastage – these kids today ha. The condoms brought for party entertainment were put to good use –which was nice, most beer and some food; somewhat hastily prepared had been digested. Having the company of youth is always a pleasure, whichever country they hail from, even Liverpool!
Whilst it was good to see the kids making an effort, Adam Ant, Kurt Cobain, Donovan and an array of male and female figurines that typified the theme of Sex, Drugs and Rock n’ Roll, I did feel a bit out of place.
Having made the effort (though I do like dressing up) I integrated with the young group of those aged (the eldest) of 20 years difference, and was reasonably sociable, before taking my leave, allowing them the freedom of expression – better to fade out and into the shadows than be the Dad that stands in way of exuberance methinks. Having said that, I can’t be that bad, encouraged to re-join the group, and to participate in the party games of beer bong and beer tennis; and we won’t even go into the card games (I smile) – Good times
I retired to the lounge where I was joined in conversation with one of my female guests for part of the evening; excited for our early morning rendezvous of sporting action. We talked for a short while before I decided it was time for bed, and so to do so.
Along with my two female guests there were in total a further ten persons crashing out at my abode. The Germanic girl had a lie in, whilst Mc Kiwi was up early, a bona fide guide to the ‘Hakka’ was an experience itself! Anywho, a nervy but nevertheless enjoyable victory over the French made us both happy.
Looking ahead, it’s not long until the celebration of night of Souls festival. Tomorrow is the Sabbath of Samhain and I will see it due reverence. It would be nice to share with others the celebration, though is more likely another night of singular experience, - ah well at least there will be friends within shadows, lol.
Posted by Billy at 03:14