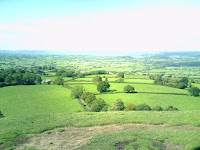 My second A is for Afterlife.
There is nothing to fear when one passes on, it is more of an inconvenience to suffer. Although leaving behind loved ones can make folk sad, one has to accept that all things must pass, the circle of life is like the seasons, continuing on an ever turning wheel.
I believe in a spiritual pathway that sees us ascend to another plain. When the time comes, shaking loose these mortal shackles, we are free to express ourselves with exuberance, to run, to play in greener pastures and fields of gold.
Maybe a paradise there be, maybe reincarnation lies beyond, or maybe we dwell in respite prior to returning to another form of existence (both known and unknown).
I have often heard the comment "I must have been bad in another life" when things go awry, and there are those who feel they have past-life memories with visions of unknown origins. Though its true there is no way of being sure with hard and fast assuredly, who can refute such with equally certainty?
As the body fades to dust, the aura has to go somewhere, and the recycling of soul is something that many tenets teach. A lot of religions use this as a shadowed threat for compliance to their doctrine. My faith is based around conviction of conscience and needs not a stick or carrot to persuade me, my credo is a choice embraced without fear or reservation.
Different traditions suggest different viewpoints. Whether it’s is Summerland; Wiccan concept of paradise, a place of comfort for souls and source of the renewal of mystical energy; where one experiences happiness and sensual pleasure.
‘Valhalla’ the "Hall of the Slain" a land where the spirits of noble warriors from Norse myth embark to, before feasting well prior to assisting the gods in the apocalyptic battle that is said to occur at the end of age.
Hades; the site of Greek myth, a 3 zoned land of ‘just and due reward’ or the attuning to Druidic lore, that sees the spirit sail to the isle of Avalon, the Isle of Apples and Arthurian legend.
For peace of mind, one chooses their own version for contentment, and therein finds their personal serenity or goal to strive for.
Departing this sphere, grief can comes with a sense of personal loss, emptiness and loneliness moreover to those left behind. Though rather than a fear for the fate of the deceased, we should encourage hope and joy rather than fear. Those left behind facing the aftermath of such departure, appraised with more understanding will allow I feel a degree of solace.
What lies beyond and how we move to, reside, and move on from is a process that many conjecture over, though it is an important tenet of Paganism, for there is much to look forward to awaiting over the rainbow Be not afraid of the unknown, it is only an answer to a question that we have yet to calculate
Posted by Billy at 11:40