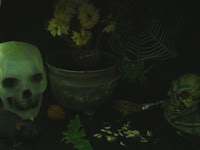 B is Black magic: associated with the supernatural, has a commonplace definition of evil use, selfish purpose, linked with Satanism and those who practice the 'dark art' are of ill-character and dubious conscience. Negativity surrounds their motives and when performed, done so for vengeance purpose.
The darkness is indeed strong, not to be underestimated and though it can be corrupted, it does not automatically follow that Black magic should be stricken from the library shelf - knowledge is indeed power.
Maybe it is the rituals that some deem perverse that is the problem? That Witch is not understandable is always open to criticism.
Hex, curses and most magic spells are always going to carry with them a degree of stigma – for those who are ignorant of its usage.
The fact that blood, tissue and other items of decaying material are used, does not automatically mean, that there is a sin behind its purpose.
Necromancy is defined “not as general black magic, but as any magic having to do with death itself”. If one looks at medical resuscitation, i.e. CPR, could one really look at this as Black magic? It could be described by some as raising the dead
The dark side of Paganism can encompass many facets of belief - its draw is quite cosmopolitan, leading to numerous interpretations of what it means to be a dark Pagan. One has to be open to many avenues. For, "Enlightenment doesn't occur from sitting around visualizing images of light, but from integrating the darker aspects of the Self into the conscious personality." ~ Carl Jung (See Wikipedia)
I feel there is a 3 way balance on all beliefs, the light, the dark and the shadow of Grey in between.
We have all heard of Yin Yang, its symbolic depiction of White and Black, Positive and Negative, Good and Evil, shows such unison of balance.
Mythology talks of darkness and chaos being the primeval force from which life sprang forth from.
We cannot claim by any means to be absorbed in the total brilliance of light, though we have come a long way – hence the shadow period. Whether we have to travel to another plain for such enlightenment, its true is conjecture.
The use and practice of Black Magic requires great self-discipline, and no magic should be taken lightly, especially that witch could cause harm.
The karmic concept of cause and effect is a serious consideration, with the practitioner accepting full responsibility for their actions, though it would be naive to suggest that there aren't those who take this approach to extremes.
Shadow self is a part of us all, holds our deepest anxieties though can; if we are not careful, taint our persona either consciously or subconsciously. I have an affinity for the dark and shadow. It brings a sense of comfort to my soul, I feel it is an integral part of Ye olde religion and faith. I believe it should be respected and not be clouded by a general media perception
Posted by Billy at 11:06