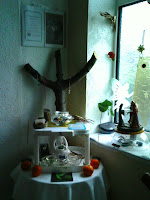 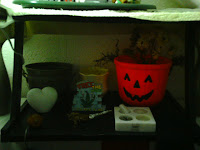 My first Pagan posting of the year, and as I am a week behind written in haste। I feel however it captures the spirit of the subject matter to some, if not all extent
My A is for Altars for I have two. I believe in the balance the light the dark and; more relevantly I think, the shadows in between.
My Altar White is situated near to the front window at the bottom of my stairs. With natural light and fresh air of opened window that allows the growth of flowers to bloom. Along with this I have elemental representation of soil from the Earth of Avalon’s slopes, Spring Water; also obtained from Glastonbury village, Fire is represented by the aromatic candles lit every night, and a simple White feather which blew in on the breeze of Air resting naturally on the table by seemingly spiritual guidance.
Around the base I have stone, wood, heather and aromatic sticks of essence. I place fresh flowers in the vase above, along with crystals of several choice; witch I wash upon every Luna passing.
This set against a background of tree branch taken from the background of my garden of witch I hang bracelet; again of crystals, gifts that came to me from unknown origin. Nymphs stand either side of the window, with fallen leaf that gently fade as the seasons pass.
Beneath my daughters of allure and wisdom three; standing on a plinth that holds a silver crystal and carved Goddess image of ancient past, are other representatives of acknowledgement. The one that stands out being the gift of ancient hand carved token of Wolf design. It is another gift from another time and place (originating from a small New Mexican village) and holds particular significance as a symbol of simplicity and spirituality.
Finally, I place fruit of the seasons, as well as providing part of my 5ive a day, it is a reminder that for, and with every season there is a time – as the lines states is to “turn, turn, turn”, and as such though I keep the principles, I make movement to their standing and utilise their properties when heeding to ritual practice.
My second Altar, I position under the stairs, there within the shadows it is dark and though has a degree of Black (for balance) it is with respectful acknowledgement that I lay my items of dead flower, rotten fruit and decayed material – though they may not be alive, they are far from dead, and sit there before going to that witch lies beyond. There are also objects of elemental importance - though not as ‘perky’ there are nevertheless relevant and important to hold.
In the performance of ritual I am mindful and careful, for whilst being somewhat of an academic novice, I am aware of the consequences of using the magic. Though it is moreover drawn by personal instinct the course I take is I feel is the right one – for I do have faith
Posted by Billy at 12:02